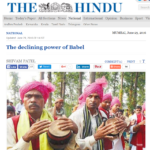 From: TheHindu.com
MUMBAI, June 29, 2016
This articles refers to Ganesh Devy and Anvita Abbi, both members of the Linguapax Advisory Board

Nearly 300 languages have gone extinct in the country since the time of independence.

Close to 800 languages and dialects exist across India, according to the People’s Linguistic Survey of India, an independent study conducted by Bhasha Research Centre, an NGO, under the leadership of Sahitya Akademi award-winning writer Dr. G.N. Devy. Reviewing the findings of the four-year survey that began in 2010, involving 3,000 scholars, researchers and historians, Dr. Devy suggests support for ‘linguistic cities’, just as for Smart Cities.

The UN Educational Scientific and Cultural Organisation has been counting too, and found there are 197 endangered languages in India, with 42 classified as Critically Endangered. Included in the list is Nihali, traced to the pre-Aryan and pre-Munda period

Access full article below:
http://www.thehindu.com/news/national/many-languages-have-gone-extinct-in-india-since-independence/article8784653.ece
or read the pdf file: 300 languages have gone extinct in India since independence – The Hindu.