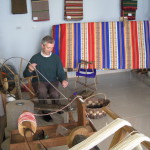 Vera Ferreira, (head of CIDLeS a research centre that works on the documentation, study and promotion of endangered and/or minority languages and on the development of language technologies for under-resourced languages) launched a crowd-funding campaign to raise money for the revitalization of Minderico (an endangered language spoken in Minde, Portugal), to promote reading and writing in the language and to consolidate its presence at the local school.

Minderico is an Ibero-Romance highly endangered language spoken in Minde (Portugal) by a community of 150 active speakers and 1000 passive speakers. Minderico emerged in the 17th century as a secret language, the language of the wool carders and merchants of the famous blankets of Minde.  Contrary to what normally happens to secret languages, Minderico extended to all social groups in Minde and became the main means of communication in the village. In this process, Minderico enlarged its vocabulary as well as its scope of application (Minderico was used in every context of daily life) and turned into a full-fledged language with a very characteristic prosody and a complex morphosyntax – though rare, this is not an unknown phenomenon in the languages of the world, but one that emphasizes the linguistic and cultural importance of Minderico!

Today, Minderico risks becoming extinct more than ever before in its history since the intergenerational transmission has been interrupted.

In the link below, you will find detailed information about the project.

This project will only receive pledges if at least €8900 is pledged by Thursday 15 October, 2015!