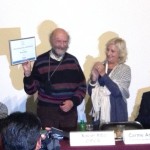 Xavier Albo Corrons, Jesuit priest, anthropologist, linguist and sociologist based in Bolivia since 1952, winner of the 2015 Linguapax International Award “for his contribution to the promotion of linguistic diversity and intercultural education among indigenous peoples and communities in Bolivia” received his well-deserved award on September 17 in La Paz, Bolivia, at a ceremony organized by Linguapax, CIPCA (Center for Research and Promotion of the Peasantry) and the OEI (Ibero Organization of American States).

Carme Arenas, president of Linguapax emphasized Albo’s “deep knowledge of the different facets of language conflicts in the Andean world, particularly among the Quechua, Aymara and Guarani communities.” She also underlined how Albó “managed to combine anthropology, linguistics and rural sociology with innovative and efficient methods” and also to “complete his theoretical knowledge with field studies that fully endorse his theories.”

Xavier Albó is already widely known and admired as a socio-linguist internationally, but the Linguapax Prize -the only award to date in this field- can contribute to further spread his immense contribution, and in particular his ideas about multiculturality and multinationality which show openness to new ways of understanding this complex world in which we live.

Other participants in this ceremony were the Minister of Foreign Affairs of Bolivia, David Choquehuanca, the Spanish ambassador, Ángel Vásquez Díaz de Tuesta, the Vice Minister of Alternative Education, Noel Aguirre, the director of the OEI Office in Bolivia, Alberto César Córdova, the secretary general of the Jesuits of Bolivia, Carlos Arce, and the President and the Director of CIPCA, Carmen Beatriz Ruiz and Lorenzo Soliz. The ceremony concluded with a reception in the beautiful facilities of the Museum of Ethnography and Folklore.

Before the ceremony, a round table discussion on ‘linguistic diversity and intercultural education in Bolivia was held, as a space for analysis and reflection considering the progress, problems and prospects of political recognition, protection, promotion and dissemination of language rights. ” Besides Xavier Albó’s presentation, the large audience could  to follow the speeches of Pedro Apala, director of the Institute for the Study of Plurinationational Languages ​​and Cultures; Adán Pari, education specialist for UNICEF, Silvia Chumira, General Director of Alternative Education, Fernando Garcés of the Institute of Anthropological Research and Pedro Plaza of PROEIB-Andes.

Here are a few pictures of the ceremony: