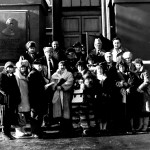 The beginnings of Linguapax date back to a 1987 UNESCO conference in Kiev, Ukraine, on the topic “Teaching foreign languages for peace and understanding”. A second meeting took place in Sitges (Catalonia) in 1988 and a third one in Saarbrücken (Germany) in 1990, underlining the idea that learning mother tongues and foreign languages was necessary not only to broaden one’s horizon and get over with self-centredness but also to raise awareness on world linguistic and cultural diversity and promote languages as communication tools in the service of solidarity and mutual understanding.

The fourth meeting, held in Barcelona in 1994, formalized the shared responsibility of the international project between the Education Sector of UNESCO and the UNESCO Centre of Catalonia. In 2001, following political and structural changes at UNESCO, the UNESCO Centre of Catalonia fostered the creation of the Linguapax association to give continuity to this internationally acknowledged project. In 2006, an International Linguapax Network was created with delegations in all continents.

Today Linguapax endeavours to consolidate the organization and to ensure that this Catalan institution keeps on conducting meaningful activities around the world in favour of linguistic diversity, multilingual education and peace, based on the respect for cultural diversity.

Linguapax also wants to share with stakeholders and promoters of Catalan culture and language all the knowledge and experience it has accumulated throughout its history, its network of international experts gathered in its Advisory Board, the research, publications and multiple good practices collected around the world.

More about Linguapax in the first issue of the Linguapax Review .
In July 2017, the Director General of UNESCO, Ms. Irina Bokova, recognises official relations with Linguapax, under the Consultative Status, thus reactivating the original link between the two organisations.