The United Nations General Assembly has recognized and reaffirmed linguistic diversity and multilingualism as priority areas for the international community, with the proclamation of the International Year of Indigenous Languages 2019 and more recently that of the International Decade of Indigenous Languages IDIL 2022-2032. UNESCO has been appointed to develop, in cooperation with a wide range of partners, including Linguapax International, a Global Action Plan for Making a Decade of Action for Indigenous Languages. In this framework, it organised a side event to discuss the role of language for development, peace building and reconciliation processes in Least Developed Countries, which took place online in New York (USA) on 17 May 2021. 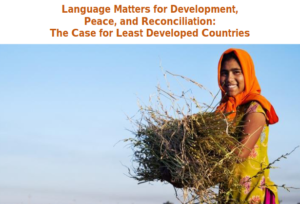 During the event, experts representing UNESCO partners and other organizations from different parts of the world acknowledged the importance of considering language issues when promoting development in the Least Developed Countries. They reflected about how indigenous peoples can be guaranteed the opportunity to express their needs and concerns on the matter, and how communities will be involved in the decision-making process.

In particular, Joseph Lo Bianco, Former President of the Australian Academy of the Humanities, Professor of Language and Literacy Education at the University of Melbourne (Australia) and member of the Linguapax International’s Advisory Board, contributed to the segment “Language matters for development, peace building and reconciliation” with a speech on Language, economy and education. He affirmed that, as evidence demonstrates, cultivating multilingualism can foster development by not only helping increase GDP, but especially improving human quality of life. Public policies that promote multilingualism also favour the inclusion and empowerment of marginalised communities and the access and persistence of minority children in schooling, among others. On the other hand, he suggested that all economic development plans should take into account language issues and include plans of participation of the affected communities. He also highlighted the critical role of education and the need of Least Developed Countries to develop explicit multilingual policies for pre-school, school, technical training and university level education.
For more information about the schedule of the event and participants’ short bios see here.