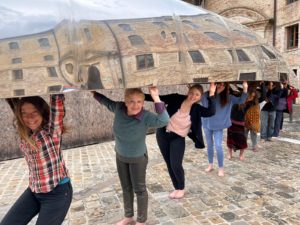 “La Langue des Oiseaux” is a European Erasmus+ project which addresses the difficulties faced by migrants and refugees when it comes to engaging with the artistic sector of the European cities where they live. It wants to contribute to the establishment of equality in cultural participation rights by spreading counter-narratives as a creative and politically stimulating response, through a multilingual theatrical training initiative.

The main objectives are:

Through this project we want to encourage intercultural communication and exchange dynamics, thereby facilitating relations and generally contributing to spread a positive perception of the encounter between different cultures. The very name of the project presents the subject of art on a symbolic level: the artist is able to look at the world with new eyes, without being tied to a territory, he ranges between the things of the world and the human beings, he speaks languages that communicate beyond barriers; like birds that, even at the highest degree of differentiation, are able to understand each other. 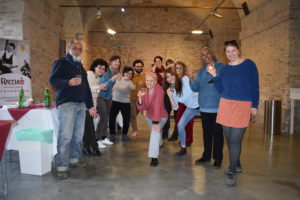 During the twenty-six months of the project, workshops will be organised in three of the partner countries (Italy, Germany and France), meetings, performances on a local and international scale, audio-visual products will be produced, theoretical, technical and socio-political publications will be completed and they will be presented and disseminated through both in-person and virtual events. Particular attention will be paid to the inclusion in the timetable of performing arts activities focusing on the theme of multilingualism, through which to explore the new boundaries of theatricality, communication and the real possibilities of expanding the aesthetic experience by widening the principle of reality to touch the overlaps between the imaginary and the possible.

The expected result is the building of a wider community at different levels: among participants, among professionals and within the different communities themselves. The following outcomes will be achieved during the course of the project:

Tapestry of Voice
A texture of voices, sounds, accents reflecting how access to multiple modes of expression is a tool for empowerment.

A Thousand and One
A performance on original dramaturgy generated by an artistic approach to the subject of mother tongue, about the vision of understanding beyond borders.

La Langue des Oiseaux: The Film
An audiovisual project, to be filmed in the five partner countries, on the exodus of migrants, the present, the past, languages, beliefs, dreams, fears and desires.

World Art Handbook
A manual for tomorrow’s theatre. A reference point for all those public and private actors who use the performing arts in multicultural groups as a tool for social and cultural inclusion, to understand how otherness is constructed and to strive to overcome it.

Words of exile
A ten-episode web radio series including contributions from each member of the groups: their individual and collective interviews with artists or experts, personal contributions related to current affairs, or reviews of plays.

Building a creative intercultural Europe. Policy recommendations to foster migrants and refugee’s participation in European creations.
A document addressed to politicians, as well as public and private bodies, to advise them in their decision-making process on building an inclusive and innovative Europe where the arts become a means of inclusion.

Obstacles and opportunities for immigrants and refugees artistic development.
An investigation into the promotion of an encounter between migrants and refugees and the live arts based on respect for and promotion of linguistic and cultural diversity. This work includes the development and implementation of tools for monitoring and evaluating the entire project in terms of its scientific utility.

The Seven Tools Box will encapsulate all of the products listed above as tools for overcoming social and cultural barriers. It will be presented to possible cultural and educational stakeholders as well as to the public, and it will be made available through a website.

Each of the project outcomes has been designed with dissemination and reproduction in mind. The play and the handbook will offer theoretical and practical insights for teachers, scholars and practitioners, thus increasing the replication potential of the project. As for dissemination, the audio resources, the web radio series and the film will use audiovisual means to reach a wider audience in the digital age, while the policy recommendation and the scientific study will aim at disseminating the project results in specialised, socio-political and academic circles.