The International and Heritage Languages Association (IHLA) is a nonprofit organization that currently roofs twenty-nine international and heritage schools in Edmonton, Canada. IHLA has a long tradition of building an inclusive society by providing support to heritage language schools and promoting respect for all cultures. The goal of IHLA is to cultivate heritage languages, preserve bilingualism, multilingualism, plurilingualism and promote multiliteracy.

In 2004 IHLA introduced the celebration of Mother Language Day. Since then, every year during the last week of February, IHLA heritage schools’ students from 3 to 18 years old celebrate their mother tongue by performing in front of parents, teachers, community members and key public representatives. IHLA schools’ students perform traditional dance, songs, and poems in their respective mother tongue. The rich cultural tapestry of the Edmonton community is showcased at display tables which struck visitors with a vivid symphony of colours of cultural artifacts, books, pictures demonstrating language, culture and history of heritage communities.

After the performances, teachers and students engage in a lively chat with visitors and everybody is welcomed to taste traditional pastry prepared by the best heritage language communities’ bakers. One can even dress up in a traditional attire, take a picture in a photo booth crafted by students and participate in a cultural treasure hunt. The familiar friendly atmosphere, feeling of pride and mutual respect define each of IHLA’s Mother Language Day celebrations.

2021 celebration, however, was very different. Due to the outbreak of the COVID-19 pandemic heritage language schools transitioned online and communities faced prolonged periods of social distancing due to the pandemic. As the numbers of infected escalated in late fall, IHLA made an uneasy decision to organize its very first MLD virtual event. It was a challenging task. Teachers and students had to perform from the confines of their homes and the IHLA board faced the challenge of bringing the recorded performances into a single piece. 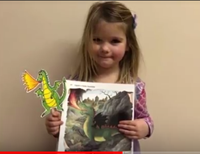 Despite the challenges, IHLA schools’ students and teachers were up to the challenge and of February 21st 2021 IHLA was streaming its first MLD online. For the first time, relatives and grandparents could watch their grandchildren proudly performing their mother tongue on FaceBook online. Even if recorded in isolation, 2021 Mother language day celebration connected the heritage language communities regionally, nationally, and transnationally. IHLA’s online MLD boosted the visibility of heritage language communities as it reached more than 3,800 people.