The 2021 issue of the Linguapax annual publication  “Language Technologies and Language Diversity” addresses the complexity of the relationship between technology and language diversity from a diversity of viewpoints. 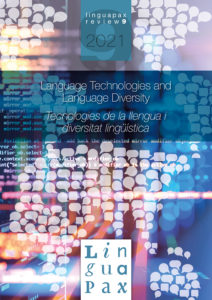 In Andras Kornai‘s own words: «With this special issue readers have an extraordinarily rich and very timely resource at hand.» To quote Juan Carlos Moreno Cabrera’s article Xenography: the impact of linguistic diversity on the evolution of writing: “Linguistic diversity is one of the most conspicuous manifestations of the impressive adaptability and creativity of this curious animal we call human being”. In spite of all the known difficulties of drawing the line between language and dialect, the diversity is enormous: the current edition of the Ethnologue lists 7,139 living languages. But this diversity hides great inequality: if all languages would be the first language of same number of people, we would have over 1.1m speaker/ language. Yet at the endangered end, about a fifth of the languages have less than a thousand speakers, and at the vital end, the top 20 languages reach over 70% of the world population.

It is not at all trivial to measure this, and Internet and linguistic diversity: the cybergeography of languages with the largest number of speakers by Daniel Pimienta is a tour de force even though the broadest swath of languages considered is the 330 “richest” languages with over a million L1 speakers. As Bromham et at. (2021) note, the greatest predictor of language endangerment is the number of first-language (L1) speakers, though there are other important factors. It is worth emphasizing that many of these factors cannot be controlled by policy: a language is more likely to be endangered if a higher proportion of languages in the region are also endangered, suggesting that, in addition to language-specific threats, there are also widespread factors that influence language vitality across a region (Bromham 2021). Other factors, such as road density or average level of schooling, can only be controlled by regressive policies that encourage a brutal ‘let’s keep them on the reservation’ form of colonialism.

This is best countered by Steven Bird’s paper Creating a World that Sustains its Languages, which offers a humanistic program of “concrete actions that you can take to help create (…) a world that sustains its languages”, ranging from the simplest everyday actions of greeting people in their own language to more complex language games. Besides outright colonialism (and its greatest driver, racism) there is also a form of misplaced romanticism, already noted by Russell (1937), that sometimes serves as a justification for a reservationist policy. This is the deeply flawed assumption that the ‘purest’ and ‘most authentic’ form of any language is manifested in the best isolated ‘most backward’ dialect (Kornai 2019).

While not organized along the exact same lines, Bird’s paper gives specific examples of most of these strategies from the viewpoint of the individual activist: “(…)concrete actions that you can take to help create this future world (…) You don’t need to join a campaign”. For the technologist the key issue, asked clearly in Linguistic Diversity in the Age of Big Data by Tunde Adegbola, is whether “modern Information Communication Technologies will promote or work against linguistic diversity”. There is no clear-cut answer, as Adegbola notes, this will “depend on the way they are employed”.

In the digital arena, Kornai (2013) argued that the best predictor of vitality is the size of the Wikipedia, and to get there requires standardized orthography. This is a subtle matter, as discussed in Cabrera’s contribution, but the cause and effect mechanism is very clear: to get the kind of tools discussed by Kuhn and by Subhashish Panigrahi in OpenSpeaks: Transforming learning of tech innovations in low-resource language documentations to Open Educational Resources, we need corpora, which come about only by communities using their speech and language in digitally mediated contexts.

Altogether, all main viewpoints, from the individual to the collective, from the areal to the global, from the native speaker to the language-agnostic technologist, are well represented in this collection, and anyone interested in diversity will find that this special issue will repay handsomely the attention one must pay to the papers collected here.”

The 2021 Linguapax Review can be read and downloaded here.

The publication will be presented in an online event on 9 March 2022, at 6pm CET. During the presentation, authors of the Linguapax Review will participate in a live debate, open to the audience, which will address questions such as:

Why should we – all of us – care about linguistic diversity? Are new technologies a threat or an opportunity for endangered languages? What are the keys for effective language digital activism?