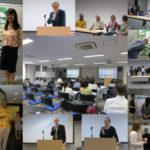 The Linguapax Asia 2016 symposium on Migration, Migrants and Language took place on June 11, 2016, at Kansai University in Osaka. The symposium was sponsored by The Institute of Oriental and Occidental Studies at Kansai University. The topic of the symposium was the interface between language and migration and how the language situation, planning and policies in various countries, Asia in particular, are managed as a result of in-migration and out-migration.

The programme of the symposium included eight 30-minute presentations, three poster presentations, a screening of the  documentary Pidgin: the Voice of Hawaii, and a round-table discussion. The presentations addressed the topics of: Language, religion, and identity in the narratives of foreign domestic helpers in Hong Kong; Language policy in super-aged Japan; Crisis of the stability of Arabic language for Arab immigrants; Brazilian schools in Japan; First language preservation of the second generation immigrants in the US; Migration from Central Asia to Russia; Rabaul Creole German in Papua New Guinea; and Sociolinguistic adjustment of Spanish speakers in Japan. The poster sessions included a topic of Conversational interactions at call centres in Japan and two presentations by university students on Multicultural group interaction in a Japanese university and on Multilingual immigrant communities of Japan.

The symposium was attended by approximately 40 participants who gave a very positive and enthusiastic evaluation of the symposium at the end. Among the participants were the Director of the Institute of Oriental and Occidental Studies at Kansai University, Prof. Nobuo Nakatani who gave a welcoming address; Prof. Emeritus Yuriko Kite, Editor for Japan Journal of Multilingualism and Multiculturalism: a representative of the Japan Association of Language Teachers (JALT) Steven Cornwell, as well as several members of the Society for Intercultural Education Training and Research (SIETAR Japan).

Linguapax Asia is striving to enhance collaboration and cooperation with the above mentioned institutions in order to continue promoting Linguapax objectives in Japan and Asia. To that end, we are now in talks with JALT to co-organise the next Linguapax Asia symposium in 2018 on the topic of bilingualism and bilingual education.