Linguapax Asia members participated at the screening of the documentary YONAGUNI at the Italian Institute of Culture in Tokyo on 21 April 2022. The film by Italian artists Anush Hamzehian and Vittorio Mortarotti depicts with exceptional artistic sensitivity the dwindling community and the disappearing Dunan language of the Yonaguni Island, in the Ryukyu Archipelago, in the South of Japan.

A prominent socio-linguist Patrick Heinrich, who is a former Linguapax Asia Board member and teacher of the online course Linguistic Diversity, What for?, acted as an advisor to the artists during the making of the film. 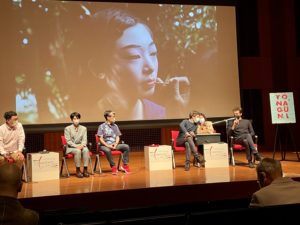 During the panel discussion which followed the screening, the Japanese socio-linguist and a researcher of Dunan language, Matsuo Shin, presented the main concepts of linguistic ecology, with the focus on endangered languages, of which the Dunan language of Yonaguni is one. He also introduced Linguapax Asia’s Sachiyo Fujita Round as a leading researcher of another endangered Ryukyuan language Miyakoan, who later held an animated discussion with the students of Prof. Matsuo.

The audience followed the screening and the discussion with great attention and rewarded the presenters with enthusiastic applause at the end. The event was an invaluable experience for the Japanese audience who are rarely informed of the linguistic diversity and the endangered languages of their country.