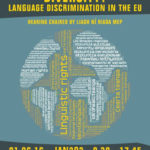 The European Language Equality Network (ELEN) held a hearing at the European Parliament last June 1st to discuss current issues concerning the language rights of regional, minority and endangered language speakers, language discrimination, and how, when EU states have signed up both to the principle of ‘respecting linguistic diversity’ and that discrimination on the grounds of language must be prohibited, can we deal with this form of discrimination.

On behalf of Linguapax International, Miquel Strubell made a presentation on “Language speakers’ rights, revisiting the 1998 OSCE Recommendations,” that we are glad to share here below:

First of all, I would like to thank the organisers and sponsors for having made this important hearing possible. We are discussing something very serious here today, and it is no surprise that Linguapax International, a non-governmental organization based in Barcelona and dedicated to the promotion and protection of linguistic diversity worldwide, is taking part in it. We believe that fostering harmony between linguistic groups is a crucial factor for peace within states and in the international community; and are convinced that putting an end to discriminatory practices is urgent.
We have to start the fifteen brief minutes I shall have (at best), to talk about «language rights» and about «language discrimination» by defining the two terms.
A «right» is «A moral or legal entitlement to have or do something».
From the latter, legal perspective a right only exists when it has been defined by law. In such a case, we should aim for the exercise of that right, not the right in itself, of course.
A quick aside. When I read Psychology at university, for me the word «discrimination» had a neutral, technical meaning: «The ability to distinguish between different stimuli». In this context, however, we are talking about a second, more popular, meaning: «The unjust or prejudicial treatment of different categories of people, especially on the grounds of race, age, or sex»… or language, we may add. When the Oslo Recommendations list «equality and freedom from discrimination, freedom of expression [and] freedom of assembly and of association», these apparently distinct rights are all closely related to the central issue of discrimination.

A document on rights such as the Oslo Recommendations might be expected to refer to them in every one of its 20 articles. In fact it only does so in 11 of them. In the rest logical consequences for the application of these rights are laid down.

There is no time to go into them individually, so I shall jump to some final remarks.

The Oslo Recommendations regarding the Linguistic Rights of National Minorities are as valid today as they were in 1998. The accompanying Explanatory Note refers to all the basic international instruments developed up till then in the field of human rights, and is a valuable source of background information. Moreover, to my knowledge no relevant legally binding instrument has come into force since that time.

So I encourage you to read them, and to keep the text on your bedside table!

The speakers of “minoritised” languages we are talking about today are, after all, both human beings and also Europeans. To the degree that legislation imposes the use of other languages (for instance, a constant bombardment at EU level, as Plataforma will probably explain), and that there are many examples of public and private discrimination – and even prejudice – against the use of these languages, their speakers (including learners) are being treated as second rate citizens. This we simply cannot accept. As Europeans. And as human beings. Thank you.

Detailed programme of the hearing: http://elen.ngo/2016/04/15/elen-hearing-respecting-linguistic-diversity-language-discrimination-in-the-european-union/