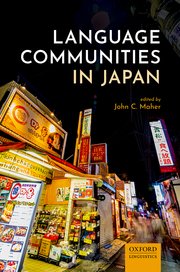 Several members of Linguapax Asia have contributed articles to the recent publication “Language Communities in Japan”, by Oxford University Press. The book offers a comprehensive sociolinguistic overview of the linguistic situation in Japan, including national languages, community languages, and languages of culture, politics, and modernization.

In the book, Linguapax Asia’s Sachiyo Fujita-Round introduces “Language communities of the Southern Ryukyu: Miyako, Yaeyama, and Yonaguni”, and Daniel Quintero presents a historical overview of the Spanish speaking community in Japan from Renaissance missionaries to the Nikkeijin – Japanese emigrants to Spanish speaking countries and their descendants. Linguapax Asia Director of Research John C. Maher writes succinctly about Hidden Christians, Buddhism, and religious scholarship of Japan. He is also the editor of the publication which is an invaluable source of information on the linguistic diversity of Japan which has often been overlooked up to now.