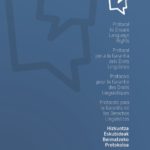 The fficial presentation of the Protocol on the guarantee of language rights took place this Saturday 17th of December in Donostia,  during a very moving ceremony which welcomed the promoters of the document, including Linguapax, as well as a large number of European organizations dedicated to the promotion of minority languages in Europe and an important representation of the Basque civil society, all gathered at the Palais Kursaal as the first signatories of the Protocol.

The presentation of this protocol is a testimony to the fruitful collaboration between the different social partners and to their capacity to create an effective tool to analyse the needs related to guaranteeing the rights of minority languages and to put in place actions that will help increase their compliance.

The Protocol is a joint initiative of Kontseilua and the Donostia 2016 Foundation. During his speech, Paul Bilbao, President of Kontseilua, underlined the extraordinary linguistic solidarity he encountered throughout these months across Europe and declared that “participation was the key of success as it showed that “although we are small communities, if we unite we have an enormous capacity for action.”

The packed-out  Kursaal Palace hosted this ceremony which combined music and dance performances with  speeches. The first people to intervene were Aureli Argemí and Maria do Pilar García, both of whom had participated twenty years ago in the process of drafting the Universal Declaration of Linguistic Rights, predecessor of the Donostia Protocol.

The president of Linguapax, as a member of the Organizing Committee of the Protocol, like CIEMEN, ECMI, ELEN, PEN International and UNPO, attended the event and endorsed the document.