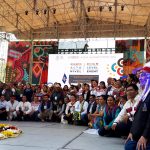 The United Nations General Assembly has decided to proclaim the period 2022-2032 as the Decade of Indigenous Languages, with the aim of fostering alliances and actions of greater scope to prevent the gradual extinction of the nearly 6,700 indigenous languages in the world and, taking account that, of these languages, there are 2,680 (40%) in imminent danger of extinction. The following announcement was made by the Ambassador of Mexico, Juan Ramón de la Fuente, to the UN, during the closing ceremony of the International Year of Indigenous Languages, held in Mexico City in December 2019. “Concerned about the alarming rate of disappearance of indigenous languages in the world, we are promoting the initiative to dedicate a decade to reversing this phenomenon and protecting these languages,” said de la Fuente. Also, according to Tijani Muhammad-Bande, President of the United Nations General Assembly, two of the world’s 6,700 indigenous languages are becoming extinct every month. “Preserving linguistic diversity is essential to preserving humanity’s common heritage. (…) With the death of languages, indigenous peoples lose a significant part of their identity”, concluded Muhammad-Bande.