Cambridge University Press has just published the book Revitalizing Endangered Languages. A Practical Guide (2021), edited by Justyna Olko, from the Uniwersytet Warszawski (Poland) and Julia Sallabank, from the School of Oriental and African Studies of the University of London.

It has been almost 30 years since a group of linguists, during the congress of the Linguistic Society of America (1992), called for action to combat the relentless decline in the world’s linguistic diversity. Since then, intellectual production in the field of endangered languages and their revitalization has grown exponentially with contributions from various disciplines ranging from the sociology of language, linguistic anthropology, politics and linguistic planning, political science and others.

We can certainly sustain that throughout this period the theorising on the processes of linguistic displacement and, to a lesser extent, revitalization processes have taken up a great deal of time and efforts of the academic world interested in these issues. However, contributions with practical and useful examples for the linguistic communities and activists who are leading the recovery of minority languages and cultures around the world are much scarcer. 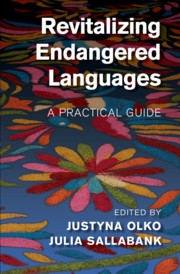 With a similar approach to the seminal book edited by Leanne Hinton and Kenneth Hale in 2011 called The Green Book of Language Revitalization in Practice, this practical guide offers a wide range of case studies written by academic or active scholars on subordinate languages with the intention of sharing positive revitalization experiences that emerge from the grassroots and go beyond institutional linguistic policies. This book includes discussions on central themes in these complex and multifaceted processes, such as the role of linguistic attitudes and ideologies, the empowerment and agency of speakers, the economic and emotional benefits for communities and NGO actions and other involved in these efforts. Presentations are also made of more than 40 examples of linguistic communities that are expanding the functional fields of their languages with the help of new technologies, arts like music, theatre, cinema and other audiovisual productions, and both informal and formal education.

In short, it is a unique and valuable book that helps to understand the different ways of engaging in language revitalization strategies and which, despite the differences and specificities of local contexts, can inspire all those who work for the recovery of minority languages.

The long list of authors comprises several members of the Linguapax Advisory Board: Josep Cru and Olimpia Squillaci (also members of the Linguapax Europe Delegation), Matthias Brenzinger and Larry Kimura, José Antonio Flores Farfán (also coordinator or the Latin America Delegation), and other Linguapax collaborators, such as Eddie Àvila and Genner Llanes Ortíz, from Rising Voices, with whom we participate in the project of a Toolkit for Digital Language Activists, and Patrick Heinrich, teacher of the MOOC Linguistic Diversity, What for?

The book has been published in open access. You can find it here.