Every 21 February UNESCO celebrates the International Mother Language Day, with a special attention to indigenous and minoritized languages, to promote awareness of linguistic and cultural diversity and multilingualism”.
Linguapax shares this goal and participates in the celebration, but from a critical point of view around the concept of mother tongue. Instead we propose linguistic diversity as an alternative approach to languages. This is why we take the opportunity offered by the International Mother Language day to present our on-line course “Linguistic Diversity, What for”?
Go on reading!

What does Mother Language mean?

Frantzisca was born in a small village among the mountains of centre Sardinia, where most people used to speak Sard, and so she did until she moved to the city to study and work as a teacher. Since the language of education in her home island is Italian, she progressively switched to this language, abandoning her mother tongue even in family conversations. This is a typical example of what we understand by “mother language” – that one a person learns from her mother, but also the language traditionally spoken by her people, in her homeland.

Frantzisca got married with a Sardinian native speaker, who also speaks Italian fluently, so the latter became the language of the new family, transmitted from the parents to their children. The children also acquired passive competences in Sardinian but felt not comfortable speaking it. If we adopt a strict definition – the language learnt from the mother – we should say that these children’s mother tongue is Italian. But defining a dominant language imposed by a centralized state to a peripheral territory as a mother tongue sounds strange, since the concept of mother tongue is often associated with that of native or indigenous language, that is what justifies celebrating the International Day of the Mother Language.

Let’s go on with the story. One of Frantzisca’s children made a big effort to adopt Sard in her social relations, and when she gave birth, she decided to speak this language to her daughter. Hence Sardinian appears again as a family member’s mother tongue, arising a strange situation of intergenerational transmission of a language that is not the mother’s family language. Furthermore, the young Sardinian speaker also learns Spanish at home from his father, naturally acquiring two first languages; and soon learns also Italian and Catalan from her familiar and scholarly environment, respectively. Which is supposed to be this young girl’s mother language? In which language(s) could she be considered, or not, a native speaker?

The concept of mother tongue comes from a specific context – one that is similar to that of young Frantzisca – in which a group of people speak and transmit to young generations an autochthonous language that is different from the national or official language of the place they live in. It assumes the existence of a strong bond between a given people and a given language and a clear opposition between native and official language. For this reason, it may probably be useful in a specific kind of context, but cannot be considered universally valid, because languages’ real circumstances tend to be much more complex and diverse.

Linguistic Diversity: What for?

An alternative way to approach the world’s languages, dispensing with the concept of mother tongue, is just focusing on this complexity and this diversity. Languages are spoken by different people, in a variety of ways, in diverse contexts, with different meanings, feelings and effects. UNESCO itself affirms that “International Mother Language Day is celebrated annually on 21 February to promote awareness of linguistic and cultural diversity and multilingualism”.
Linguapax opts for the last perspective, highlighting the importance to protect and promote linguistic diversity beyond the concept of mother tongue.
But what is language diversity? How does it manifest and how is it managed? Why is it important? How do we experience, understand and feel it?

The answers to these questions may appear obvious to some, or sometimes we just take them for granted. Nonetheless, given the complexity of reality, the multiplicity of experiences around languages, and the variety of perspectives from which the issue is approached, it is necessary to create spaces where to explain and experience linguistic diversity throughout its multiple dimensions. This is the main objective of our Massive On-line Open Course (MOOC),
“Linguistic Diversity, What for?” 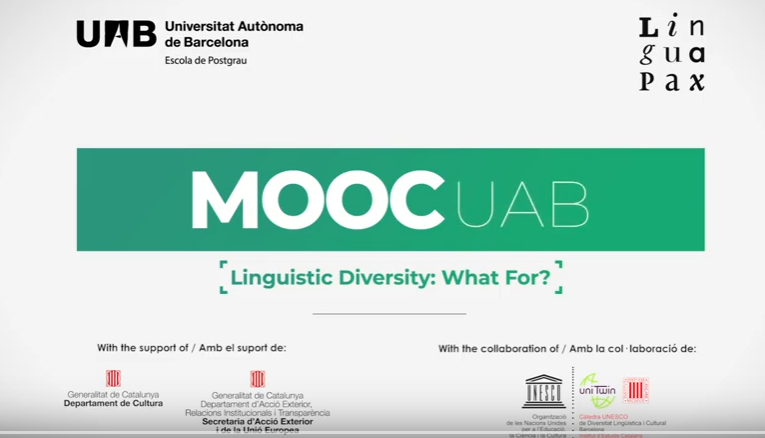 This MOOC, available for free through the platform Coursera, offers a wide panorama of linguistic diversity: we deal with aspects related to the conceptual and legal frameworks and explore different fields in which linguistic diversity matters, diverse perspectives to approach the issue and the questions that arise around it. We also present successful practices of language revitalization, promotion of multilingualism, and innovative and creative enterprises dealing with linguistic diversity. With this course, we intend to help the public understand and manage various contexts that emerge from linguistic diversity in different environments of social interaction.

Apart from these more didactic aims, our real motive to create the MOOC “Linguistic Diversity, What For?” is to create a platform where to feel diversity – through the different perspectives but also the variety of languages in which video lessons are offered (with subtitles in English and Catalan, by now). And a space for sharing and discussion where all participants – teachers and students – may enrich their knowledge, compare perspectives and widen horizons. We believe that this is essential for understanding linguistic diversity and its importance, and to encourage its defense and promotion.

If you are interested in our approach, you may want to know more about our MOOC and how to follow it.
A MOOC is a Massive On-line Open Course, that, in this case, does not need any previous knowledge. You can enroll at any time: all the materials will be available for you from the very first moment. You can enroll for free (selecting the “Audit only” option) and pay just in case you need a certificate.
The course is organized in five weeks, and we recommend you not to exceed too much this period; however, you can really follow it at your own pace.

Each week contains video lessons, recommended readings and on-line resources and information about the teachers. You can test your progress through a quiz, and at the end of the course you can submit a final activity which will be assessed by peer-review.
Each week handles a different dimension of linguistic diversity, briefly exposed in a video presentation which also serves to orient you through the main questions of the week. We propose you several debates through the week forums: you may choose to participate in some of them and also create new ones.

In the first week “Linguistic Diversity in the World: Introduction and Transversal Perspectives”, we start contextualizing the notion of “language” and ‘linguistic diversity’, dealing with historical and geographical developments, elements that integrate them, legal, social and educational approaches and the role of languages in the digital environment. During the second week “Language and Territories of Origin”, we explore the geographical and historical panorama of linguistic diversity in different places, with references to revitalization practices. This more conventional but still valid perspective linking languages and territories is necessarily enriched with another that covers languages in movement, changes in linguistic dynamics, new challenges in the interpretation and management of linguistic diversity. This is the content of week 3: “People Movements and Linguistic Diversity”.

Though every week we get in touch with some examples of revitalization efforts, Language Revitalization is the topic of the fourth week, where we familiarize ourselves with the basic concepts and the main actors of linguistic revitalization, get to know specific cases of revitalization and different areas of application, and discuss the main issues that arise when undertaking a revitalization action or program.
Finally, in week 5 “Linguistic Diversity, Creativity and Social Transformation”, we present meaningful cases in which linguistic diversity is managed as a tool for creation, self-knowledge, elevation of democratic quality and transformation of human life.

Although we have tried to explore the main dimensions of linguistic diversity, this brief course is obviously not exhaustive. It intends to be a first stimulus to detect and discuss many other issues that are not initially included: cases of languages, territories, programs of revitalization and/or promotion of multilingualism and linguistic biographies that students are encouraged to present and share with each other.

We invite all of you to contribute to illustrate, understand, discuss, protect and promote language diversity by joining the MOOC “Linguistic Diversity, What for?“.

With the support of: