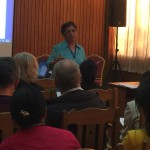 For the first time ever, Myanmar held an International Conference on Language Policy in Multicultural and Multilingual Settings, hosted by the University of Mandalay from 8 – 11 February.

Organized by the Ministry of Education, the event is part of a Language, Education and Social Cohesion (LESC) initiative, supported by UNICEF in partnership with the University of Melbourne. More than 300 participants from academia, education and language sectors shared their experiences, successes and challenges on multilingual education, language policy and social cohesion.

“Multilingualism can be considered the new literacy of the 21st century, a skill for all people”, said Dr. Joseph Lo Bianco, Professor of Language and Literacy Education, University of Melbourne, Australia. “How can we best educate children who speak minority languages to ensure they become literate bilinguals? How does a country make the most of its rich linguistic resources and build social cohesion and understanding among its diverse citizens?” These are some of the questions participants  discussed at this conference.

The focus of the LESC Initiative has been a nation-wide process of language policy development. Since 2013, facilitated dialogues have taken place across Myanmar to build a language policy in the multicultural and multilingual Settings which will be a key focus of discussion at the Mandalay Conference.

“Education is both a fundamental right of children and a key strategy to build social cohesion, peace, and sustain development”, said Bertrand Bainvel, UNICEF Representative to Myanmar. “In countries like Myanmar, promoting and managing the diversity of cultures, ethnicities, languages and religions, needs thoughtful consideration to society, with the question of education and language policy at its core”.

Professor Maya David, distinguished member of the Linguapax Advisory Board, chaired one of the panel discussions on and presented a paper on National Languages – Medium of Instruction – Empowerment or Disempowerment“, in which she _and co-authors Francisco Perlas Dumanig and Syed Abdul Manan_ analyse the effects of national language policies in Malaysia, Philippines and Pakistan.

During the event, UNICEF launched the publications on the multi-country LESC initiative, supported by the organisation’s East Asia and Pacific Regional Office. The publications include research from Myanmar, Malaysia and Thailand and highlight the importance of mother-tongue-based multilingual education, particularly in minority ethno-linguistic communities in the region.