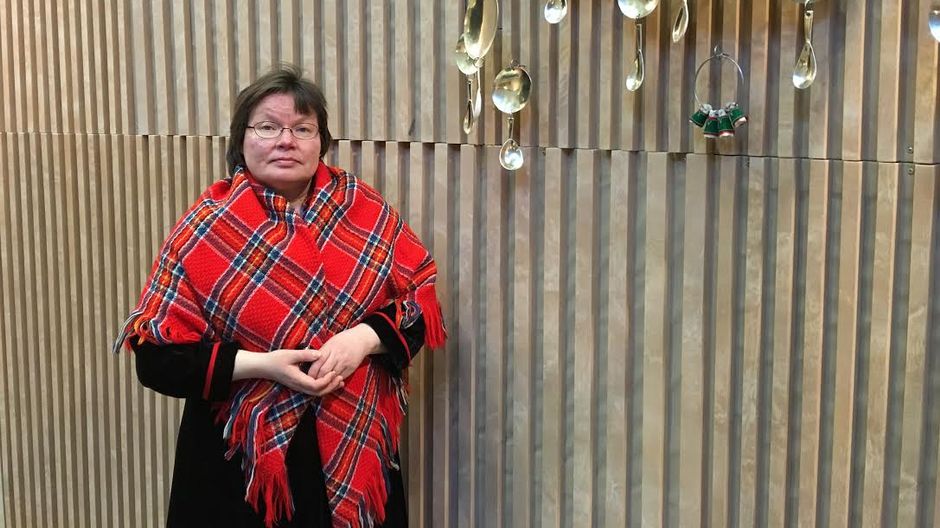 This short narrative is based on an email exchange where Marja-Liisa Olthuis, the Linguapax 2020 award winner replied to questions that I (TSK) sent to her in October 2020. I have summarised some of her answers; in others I have my questions and Marja-Liisa’s answers.

Marja-Liisa Olthuis (MLO) was born in Ivalo in 1967. Her childhood home was bilingual. Her parents and grandparents spoke Aanaar Saami (AS) among themselves, but they spoke Finnish to the children, as many Saami did, thinking it would save the children from the difficulties and racism that they themselves had experienced. Marja-Liisa learned the language listening to the family. She had a period of some ten years when she did not speak AS herself, but she took the language back through her studies and later in life. At the university in Oulu she initially majored in North Saami. At that point she did not give much thought to Aanaar Saami, nor did anybody else. AS did not seem to have any future, and there were no jobs for which knowledge of it could be used. ML chose to do a degree in Finnish, with North Saami as her minor subject, and received an MA in Finnish.

Her future husband, who is Dutch, was completing his studies and had an internship at Kemira in Oulu. That’s how they met. Later, ML became a university lector in Finnish in the Netherlands.

When a language nest in Aanaar Saami started in Inari/Aanaar (where the family often spent some time), it felt natural for ML to start using AS also as the home language; the change did not involve any big drama. ML’s husband speaks Dutch to their two daughters but he also understand everyday discussions in AS. ML speaks only AS to the children. Initially it was difficult, but she thought that the support from the language nest extends beyond the location itself; also people far from the language nest have been encouraged to use the minority language elsewhere. Their first daughter using AS was generous and forgiving, and a good teacher. And the daughters do not seem to suffer any language traumas.

TSK: how did your ideas develop about Aanaar Saami needing the project that ultimately developed? (See https://www.linguapax.org/en/marja-liisa-olthuis-is-the-winner-of-the-linguapax-international-award-2020/,  https://www.casle.fi, and https://www.oulu.fi/giellagas/node/40140.)

MLO: This honour should go to the then rector of the Education Centre for the Saami area, the late Lassi Valkeapää. He asked me to “do something” so that we could get teachers of Aanaar Saami – they did not exist at that point. The University did not train AS experts, meaning we had to construct a syllabus and market it to the University. I had earlier taught basic courses in AS, but this was nowhere near enough to train people who did not know the language at all and on the other hand there was a real need in the field. We developed an idea about the project and applied for money from the Finnish Cultural Foundation (and got it!).

I divide my time between Rotterdam and Aanaar/Inari, and several other places, according to what the situation demands. Now (October) I have spent 3 months in Aanaar. I direct a project similar to the AS project, but this time all three Saami languages in Finland participate: AS, Skolt Saami and North Saami. I am also continuing with language technology work for AS, and promoting literacy in AS, with projects promoting various literary activities in AS, trying to activate AS speakers to also write in AS. The main project is “One Hundred AS-writers”, which employs one full-time person. A subproject is “One thousand pages of youth literature”; it has had youth literature translated into AS. The young people have also participated in the translation, and the project has guided them. Students from the Giellagas Institute in their final phase of studies have participated in (2013): Revitalising Indigenous Languages: How to recreate a Lost Generation. How do you think your work has influenced other Indigenous peoples?

MLO: At least South Saame in Norway has profited. We hope that our work might support others also internationally, because language revitalisation is a global issue.

TSK: Many Indigenous peoples have found inspiration from the project, having read articles about it. Many want to know what the long-term effects on the Aanaar Saami community have been.

TSK: What is behind your creativity? And could you say a few words about your latest book, from a completely different area.

MLO: In my work I try to create linguistic futures with a long-term perspective, and to guide activities in that direction. I’m planning, thinking of how I myself would like a language community to function. It is easy for other people then to join in the task, and it is this and the different angles and points of view that create a feeling of creativity. This is teamwork.

I have been writing a scifi book for the last three years. I have followed the lectures of the Dutch astronaut André Kuipers and been inspired by them. Last autumn, exactly a year ago, I spent two evenings with the Apollo-astronauts, and I learned an incredible amount from them. “My” scifi journey has been interesting, and I have needed to ask for support, for instance from the Goddard Space Center in Maryland. I am really grateful for the help I have received, and the fact that I have, as an amateur writer and linguist, been able to bother/inconvenience space experts, been allowed to attend ESA’s and ESTECS’s space meetings. I have had to learn things about a world completely new to me and to read space journey manuals. As a creative writer I have so far been a short story writer because one can write them in a relatively short time; I have also written some poems.

TSK: and what next?

MLO: I am just now moving the language nests away from the AS Association, to become the responsibility of the Inari municipality. To stabilise their operations under a new administrative environment is the next issue. The University of Oulu is planning to create a new chair for language revitalisation and language technology. I am trying to implant these issues more firmly in the academic world, and enhance the literary culture of Indigenous and minority languages. These are some of the ideas for the immediate future.