Linguapax joins the ELEN network (European Languages ​​Equality Network), the leading organization in Europe that works for the protection and promotion of the lesser-used European languages ​​and to guarantee linguistic equality by giving a voice to their speakers on a local, regional, national, European and International scale.

ELEN represents the 50 million people, 10% of the EU population, who speak a regional, minority or endangered language. It includes 174 organizations from 25 European states representing 50 languages.

ELEN was created in 2011, after the shutdown of the former European Office for Lesser Used Languages ​​(EBLUL) when losing funding from the European Union, as a dynamic, grassroots civil society organization that not only replaced the EBLUL but rather promoted the incorporation of other entities, especially from central and eastern Europe.

Being part of this organization will allow Linguapax to expand its network and establish a direct relationship with ELEN member entities, strengthening its capacity to intervene in Europe and, above all, to be able to participate directly in common and joint strategies and actions aimed at to the consolidation of linguistic diversity and the promotion and protection of non-official languages, small or less used at the European level. 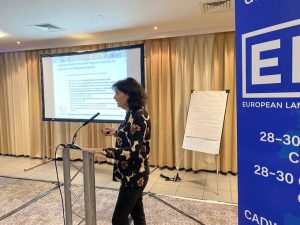 On the other hand, Linguapax will act as a global disseminator of the successful practices regarding linguistic revitalization, bilingual/multilingual education or the management of multilingualism performed by the organizations that are part of ELEN so that organizations from other continents can take them as an example; as well as providing ELEN members with the knowledge, expertise and experiences generated in other territories.

The incorporation of Linguapax into ELEN was made public during its General Assembly celebrated in October 28th and 29th in Cardiff, Wales.

In addition, Linguapax, through its president, participated in the round table on the International Decade of Indigenous Languages ​​led by UNESCO together with a representative of the Council of Europe’s expert committee. This table discussed the role of European organizations in building a global community dedicated to the preservation, revitalization and support of indigenous languages ​​around the world.

Now more than ever, it is crucial that organizations join forces, play a proactive role in defending linguistic diversity, and continue to leverage the connections, knowledge and experience that contribute so much to the common goal of securing a future for all languages.