In December 2019, at the “Pūnana Leo” school (in English, “the nest of the language”), in Hawaii Island, the Linguapax International Prize was given. From this year that we left behind, the winning candidacy was for Larry Kimura, a professor who has developed a persevering and tenacious task for revitalising the Hawaiian language, whose prognosis was pointing at extinction. In other words, Larry Kimura has led a fight against the process of disappearance of a language which, due to the political situation on the Island after the 17th century, had reduced to a hundred old people. 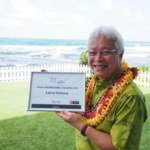 A direct consequence of the annexation of the Hawaii Kingdom as a new US state was the ban on Hawaiian language in schools. This means that the English language was imposed. This led to, not in so long term, the fact that in the mid-twentieth century children, young people and middle-aged people hadn’t had school contact with the language of the country. That is why Larry Kimura’s first focus was on education. In the 1970’s, he pushed for a complete language immersion programs in Hawaii, from preschool to high school in “Pūnana Leo”. From this point, a general implication was spread to families who were also aware of the importance of preserving the language. Consequently, Hawaiian is today the main language for hundreds of families. 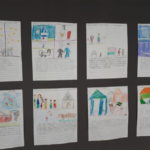 Drawing made by children at the school “Pūnana Leo”

However, the story does not end here. There is still a long way to go. According to UNESCO, about 40% of the world’s 7,000 languages ​​are “endangered”. In other words, prone to extinction within a hundred years. Unfortunately, Hawaii is still in jeopardy. Since a language remains alive if its use is alive, it is imperative that the language is present in all areas and spaces of everyday life.

Larry Kimura states: “The language is the first thing that disappears when the villages are in danger of extinction and the people do not realise it until it is gone. Because identity is maintained through cultural manifestations – songs, dances, gastronomy and even religion. And the language disappears imperceptibly. And, when members of the community leave it, it is too late to retrieve it.”

The award ceremony was a tribute to all the students (about 600), to Professor Larry Kimura through songs, dances and speeches. Everything in Hawaiian language. Firstly, Dr. Matthias Brenzinger, an Africanist and specialist in linguistic revitalisation processes and Linguapax Awarded in 2017, presented the trajectory of Larry Kimura and Ms. Mònica Pereña, President of Linguapax, transferred to the Hawaiian community that were gathered at the school the criteria that the jury had taken into account when delivering the prize, and gave it. 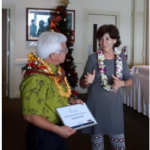 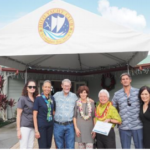