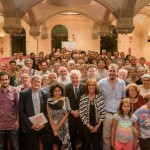 The Catalan Minister of Culture, Ferran Mascarell, chaired this July 22 the second meeting of organizations promoting the Catalan language, an event aimed at acknowledging the active committment of associations to the language of Catalonia. In this II meeting took part entities representing all Catalan-speaking territories: Aragon, Andorra, Northern Catalonia, Alghero, the Balearic Islands, Valencia and Catalonia. The event was also attended by the director general of Linguistic Policy, Ester Franquesa.

Linguapax is one of 34 organizations that have joined this year’s census which reaches 171 organizations and foundations from fields as diverse as business, labour, scientific and technological, social integration, leisure, training, cultura or language promotion itself.
The organizations and foundations that form the census promote activities oriented to foster positive attitudes towards Catalan or increase their knowledge and use among the general population or among specific groups. Donations in favor of foundations and associations registered in the Census can be deduced from income tax.
The website of the Directorate General for Language Policy, shows a map with all entities.