Our focus has been on building awareness about language use in minority language settings, supporting teachers of first nations and heritage languages, and facilitating endangered language preservation and documentation projects. 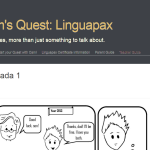 A recent project aimed at awareness building among youth can be found at: http://linguapaxquest.com.  Presented in the form of a series of comics, like a graphic novel, with audio recordings of the text, the storyline follows a young boy named Cam to eleven countries on six continents. Cam’s mission is to “light up a globe” and defeat his menace, the Evil Lopran and his minions, who have begun to destroy the languages of the world by attacking people’s capacities to speak their mother tongues.  With the guidance of his father, an anthropological linguist, Cam collects meaningful artifacts at each destination to help create an antidote which they hope will save Carla, Cam’s mother, from losing her language.  Students help defeat Lopran by collecting an artifact (for example, legends, proverbs, ways of seeing the world, traditions and linguistic rights), learning to count to ten in a variety of languages and completing quizzes for each of the eleven countries Cam visits. After collecting artifacts from two countries a continent lights up on the globe.

We have also been linked to the new FEL-Canada project which held its inaugural AGM in June 2015 and to the Citizenship Education Research network (CERN) and support the Endangered Language Fund.

Dr. Bilash has attended numerous meetings of the Linguapax Institute in Barcelona, presented at Linguapax Asia conferences in Tokyo and welcomes collaboration with interested individuals or groups throughout North America.

The International and Heritage Languages Association (IHLA) is a nonprofit organization that currently roofs twenty-nine international and heritage schools in Edmonton, Canada. IHLA has a long tradition of building an inclusive society by providing support to heritage language schools...
MORE