In the framework of the II Faberllull Residence on Linguistic Rights, Linguapax organised two events in which the residents encountered other language activists and language passionate people from Catalonia and other parts of the world.

The first of these events was a conversation between researchers, activists, speakers and learners of minority languages, in which they shared their experiences, reflections and emotions linked to their languages. Sonia Antinori conducted the session in a very kind and familiar style, with residents of the Faberllull Residence on Linguistic Rights and members of the Olot CNPL with two Catalan learners. 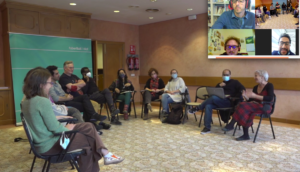 We spoke in English but also in the languages of each participant. The session was very nice, interesting and intense; we shared personal stories about socialization, learning, love and hate relationships with languages, different perspectives on what languages are, described, recited and sung metaphors. We heard Catalan, English, Arabic, Sardinian, Hindi, Yoruba, Spanish in the Chilean and Colombian variant, Veneto, Italian, Dutch, and also some Japanese, Welsh… Finally, recommendations were made for the promotion of minority languages, linguistic rights and linguistic diversity. Lucía Rojas and her technical team recorded the whole session, from which audiovisuals will be created to raise awareness about the importance of linguistic diversity.

The meeting took place on 3 November at 16 hours, in the meeting room of the Fluvià Hotel in Olot, Catalonia.

Grieving the Loss of my Language

Linguapax collaborated with the Chambra d’Òc and the Faberllull Residence in the organisation of a conference and poetry recitation on the pain of losing one’s language. The event gave visibility to the feelings and emotions related to language loss, often neglected in Western society. 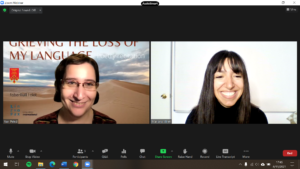 Poets and language activists from Europe but also other parts of the world sent us their poems, which were introduced by a keynote speech by Yael Peled and streamed online on 4 November at 6pm CET.

With the support of: