To mark the beginning of the International Decade of Indigenous Languages 2022-2032, the Faculty of Philology of the University of Salamanca organized the second edition of the Training Course: Amerindian languages and language contact in Ibero-America, which took place from 20 to 28 September. 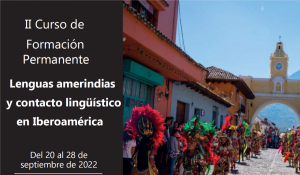 The course intends to encourage interest in knowledge and the study of indigenous languages of Iberoamerica. It is particularly targeted at people interested in linguistic and cultural diversity, anthropological linguistics, linguistic typology, the management of multilingualism and language contact in the Ibero-American area. For its development, the Faculty of Philology of the University of Salamanca has had the participation of experts in linguistics and revitalization, including some members of the Linguapax Network.

Our organization participated in the Round Table “Documentation, Scripturalization and Revitalization of Native American Languages”, that took place on the first day of the course. The head of Linguapax Latin America, Jose Antonio Flores Farfán, professor at the CIESAS and coordinator of the Acervo Digital de Lenguas Indigenas, and Josep Cru, professor at the University of Newcastle and member of the Board and  the Advisory Board of Linguapax, both intervened in the Round Table. The discussion, moderated by Professor Carla Amorós, and also attended by Dr. Karla Avilés and Dr. Karolina Grzech, focused on the limits of contact phenomena in situations of linguistic threat; the role of writing in the processes of linguistic-cultural claim, as well as the need to connect linguistic description-documentation with the agency of speakers. Through the example of the fieldwork on the Nahuatl language, Ecuadorian Quechua and Yucatan Maya, the main challenges to the functional stabilisation of Native American languages were also addressed.

The course, which lasts 30 hours, was led by Professor Carla Amorós Negre (also a member of Linguapax) and coordinated by Professor Francisco Rubio Orecilla. It is endorsed by the Spanish Language Department and the Institute of Iberoamerica at the University of Salamanca. 70 persons subscribed, either in presential or virtual format.