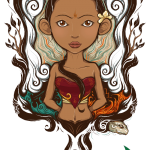 We are pleased to announce that the winner of the 2018 edition is BASAbali, a “collaboration of linguists, anthropologists, students, and laypeople, from within and outside of Bali, who are collaborating to keep Balinese strong and sustainable”.