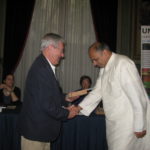 Ganesh Devy (1950), is a renowned activist campaigning for the preservation and revitalisation of threatened languages and human rights activism for indigenous peoples (known as adivasis) and nomadic communities in India. Prof. Devy is Founder of the Adivasi Academy at Tejgadh , Gujarat, and of the Himlok Institute of Himalayan Studies in Himachal Pradesh devoted to the cause of indigenous peoples and their languages. The focus of his work has been tribal education and the promotion and documentation of tribal languages, cultures and arts in central India and Himachal Pradesh. These activities have led to setting up of two tribal museums, one at Tejgadh Gujarat and another at Keylong Himachal Pradesh, and also creating a Consortium of 12 tribal museums spread all over the country, to digitize information on all artifacts available in these museums .

Through the BHASHA Research & Publication Centre Baroda, Prof. Devy has been actively engaged in publishing over ninety books in English, major Indian languages (Gujarati, Marathi) and twenty three non-Scheduled languages (not given Constitutional protection). He has edited periodicals on tribal literature; the Journal entitled DHOL “The Drum” has been instrumental in committing at least ten tribal languages of the Bhili group into writing. The BHASHA Centre has been accredited by the Ministry of Tribal Affairs, Government of India, as a “Centre of Excellence”. 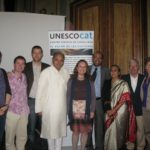 Recently the BHASHA Centre has embarked upon a megaproject of Peoples Language Survey of India, under the stewardship of Prof. Devy, to revise and update the Grierson Linguistic Survey of India (1903-31) . A twenty-volume Thesaurus of cultural cartography will be a useful tool for language revitalization as perceived by different sections of society.
A literary critic with deep insights into Indian and Western civilizations, Prof. Devy has authored about 15 books in English, Gujarati and Marathi: Critical Thought (1987), After Amnesia (1992), Of Many Heroes (1997), India Between Tradition and Modernity (1997), Indian Literary Criticism: Theory & Interpretation (2002), Painted Words: An Anthology of Tribal Literature (2002), A Nomad Called Thief (2006), Vaanprastha, Adivasi Jane Che, The G.N. Devy Reader’ ( 2009).

The Center of Intercultural Indigenous Research of Tierradentro (Centro Indígena de Investigaciones Interculturales de Tierradentro – CIIIT) serves as a focal point of cultural and linguistic revitalisation in the Cauca, Colombia. It was created by the 24 chapters of Tierradentro (Cauca, Colombia) to promote, assist and develop research and community education projects according to ethnoeducational principles from. The CIIIT is a member of the Indigenous Intercultural Autonomous University (Universidad Autónoma Indígena Intercultural), suggests curricula and establishes technical cooperative agreements with scientific and academic institutions, among others. It is commited to the comprehensive defense of indigenous land by initiating research processes which respond to both cultural and political contexts of the community as well as promoting acknowledgment and the recreation of their own knowledge.