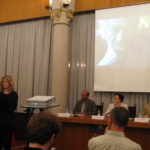 Miquel Siguan i Soler (Barcelona, 1918-2010) was Professor Emeritus of the University of Barcelona and Honorary Dean of the Faculty of Psychology. He was a member of the European Academy, and doctor honoris causa by the Universities of Geneva, Sevilla, the Basque Country and the Autonomous University of Barcelona. He was one of the founding members of the Institute of Educational Sciences. He devoted a large part of his professional life to the promotion of language teaching with philosophical, psycholinguistic and pedagogical perspectives framed in a reflexion and action focussed on the potential of multilingual education in intercultural understanding processes and peace promotion. In that sense he was one of the inspirers of the Lingapax philosophy. 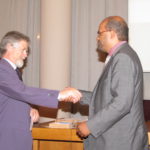 Robert Phillipson (England, 1942) is Professor Emeritus of the Department of International Language Studies and Computational Linguistics at the Copenhagen Business School. Mostly known internationaly for denouncing linguistic imperialism, and a specialist of relations between language and power and dynamics of linguistic domination/subordination. Author of extensive writing on linguistic rights, his most famous works are Linguistic Imperialism and English-Only Europe?: Challenging Language Policy.