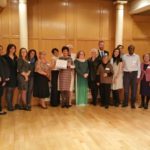 Last Thursday, October 20, the president of Linguapax  Monica Pereña, delivered the International Linguapax Award 2016 awarded ex aequo to the International and Heritage Languages Associations (IHLA) based in Edmonton (Canada) during a moving and elegant ceremony involving all member schools of the Association.

In addition to the speech of the President of IHLA, Antonella Cortese, Dr. Trudy Aberdeen made a historical journey through the achievements of the Association. Then the representative of the Canadian Ministry of Education took the floor, followed by the Consul of Portugal who attended the event on behalf of the Portuguese school, the oldest IHLA member. Polish, Russian and Greek dancers closed the evening.

Words of gratitude for the award itself and for the presence of Linguapax were countless and heartfelt. And from the meetings with the different schools visited during the week, there is a feeling that this recognition is specially significant at a time when languages, other than French, are less and less valued.