At a press conference held on 21 October 2022 at the Miyako City Hall, Linguapax ASIA representatives donated  32 set of the Old Miyakoan Proverb Cards to the Miyako Education Authority who will distribute them among all of the 32 elementary, middle and high schools on the island. Each set contains 48 proverbs in the original language Miyakoan, translated into Japanese and English. The authors, a sociolinguist and Linguapax ASIA Board Member Dr. Sachiyo Fujita Round and a Miyako Island native Ms Seiko Sadoyama, gave an account of the card project from its inception to its completion some four years later and answered questions from the local newspapers and TV reporters. 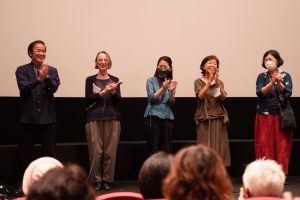 On the same day, Dr. Fujita-Round and Linguapax ASIA director Biba Jelisava Sethna visited the local middle school where a project “One Miyakoan Phrase a Day” was started in April to encourage pupils to learn some basic words and phrases in the endangered Miyakoan language. Every day during lunch time, a new phrase is introduced by a designated group of students via the school broadcasting system. Students are encouraged to practice the language further after school in the library where they can create cards with pictures and phrases they have learned and repeat them by watching  recordings on iPad set for this purpose. 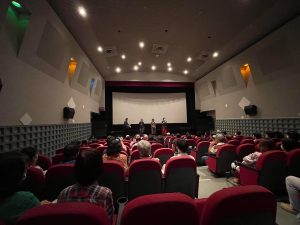 Two days later, the people of Miyako were treated to a free screening of four documentary films by Dr. Sachiyo Fujita Round, which focus on language practices, traditional fish and sugar cane industries, and the folklore of the island. The event was completed with songs by the local folk singer Miwa Yonashiro and a reading of a short essay by a middle school student Runa Tomori on how she would like to protect the local language. At the end, the Proverb Cards were briefly introduced by the authors to the audience who could purchase sets at a discount rate. In her closing remarks, Linguapax ASIA director Sethna stressed that the Proverb Cards project is a small but important step in the preservation and revitalization of the Miyakoan language.