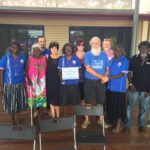 The Buku Larrngay Mulka Art Center in Yirrkala (Northern Territory, Australia) hosted the ceremony of delivery of the 2016 International Linguapax Award 2016 granted to the Yambirrpa School Council/Djarrma Action Group of the Yolngu community of Yirrkala, ex-aequo with the International and Heritage Languages Association, IHLA (Alberta, Canada).

Chants and traditional dances accompanied acknowledgment messages to former leaders and to all those who have contributed to the maintenance of Yolngu language and culture, and those who do so in the future. Representatives of the awarded institutions took the floor, as well as the promotor of the nomination, professor Trevor Stockley, and Leon White, director of homeland schools, who recalled the history of the bilingual education programme throughout its 40 years life. 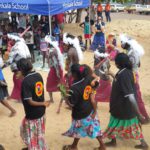 The president of Linguapax, Monica Pereña, made a speech on the role of this organisation in the defense and protection of minority and indigenous languages, recalling the Universal Declaration on Linguistic Rights, and praised the efforts of the Yolgnu community to maintain its language and culture and congratulated its achievements and the involvement of different social grups.

The event continued with the delivery of the award diploma and a musical performance by a renowned local singer.

The presence of Linguapax is an incentive to continue fighting for a programme that is threatened by the lack of support from the regional and federal educational authorities.

The award ceremony in Alberta will take place in October.