Linguapax Asia celebrates the release of the definitive version of the card game ‘Old Miyakoan Proverb Cards’, created by Dr. Sachiyo Fujita-Round, a board member of Linguapax Asia, and her local collaborator, Ms. Seiko Sadoyama.
The materials, produced with the support of Linguapax Asia, Linguapax International and the Catalan Ministry of Foreign Action, contain 48 proverbs in the original language Miyakoan, translated into Japanese and English. 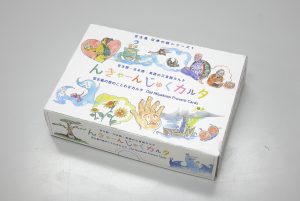 The game box contains 1) trilingual reading cards, 2) picture cards, and 3) an annotation sheet and was the result of a team work: Ms. Sadoyama, a Miyako Island native, selected the proverbs, annotated and drew them as picture cards matching with the reading cards. Fujita-Round, sociolinguist, cross-referenced all proverbs in the literature and edited pronunciation and annotation. Shunsuke Kado designed the cards, package and annotation sheet. Shinano Angevine translated Japanese into English and Kado added QR codes to the reading cards, through which players can listen to the original Miyakoan language and watch the corresponding pictures, edited by Daiju Kojima . 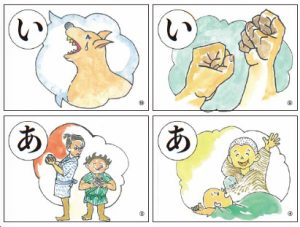 Miyakoan is one of eight endangered languages in Japan listed in the UNESCO’s Atlas of the World’s Languages in Danger of Disappearing in 2009: Ainu, Hachijo, Amami, Kunigami, Okinawa, Miyako, Yaeyama, and Yonaguni. Among these eight languages, six are Ryukyuan languages. They are conventionally divided into two groups: Northern Ryukyu (Amami, Kunigami, Okinawa) and Southern Ryukyu (Miyako, Yaeyama, Yonaguni) (see Maher, 2022). The Miyakoan language belongs to the Southern Ryukyu group and is marked as ‘definitely endangered’.

In Okinawa prefecture today, the Japanese language plays the role of national lingua franca. At the community level, the vernacular/local spoken language may, or may not, be spoken, depending on community and island (Fujita-Round, forthcoming 2023). Miyakoan is a spoken language and does not have its own writing system, for this reason the cards are written in the Japanese system.

As a team, Ms. Sadoyama and Fujita-Round will continue to make creative language resources materials for the younger generation in the Miyako Islands.

With the support of