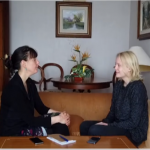 The demographic changes that are taking place globally also affect Catalonia considerably. These changes lead to situations that question the status quo; there are new languages, new religions, population pyramids that change the configuration of our societies; new beliefs, and new economic and job opportunities. The Faber d’Olot residence, linked to the Ramon Llull Institute, planned for 2019 a residence entitled “Migration Policies, Diversity Policies”, in which sociologists, political scientists, anthropologists, historians, social educators, economists, lawyers, researchers and professionals in the field were invited to participate, with the intention of debating the challenges that governments, institutions and citizens face when managing these changes.

Charo Reyes, researcher at EMIGRA/Cer-Migracions and Europa Sense Murs (Europe Without Walls), and Nina Carlsson, PhD candidate in Political Science at the University of Södertörn, Sweden, have been two of the residents that Linguapax has brought to the residency, with the aim of tackling, with concrete proposals, the challenge of managing linguistic diversity: language policy as a cross-cutting public policy, and language planning as a mechanism for fostering respect, for multiple identities, and for the integration and definition of languages in education, and as a strategy for describing the linguistic landscapes that are drawn in large urban concentrations.

In this video, recorded by Linguapax, Charo Reyes and Nina Carlsson talk about the subject and put some questions on the table