Tyety Ñutyok means “the child prodigy” and is the title of a trilingual book with augmented reality narrated and written in the language of Umbeyajts by the Ikoots researcher Obdulio Muriel Díaz . The book, with translations into English and Spanish, has been published by Editorial Resistencia, with the collaboration of the Australian Embassy in Mexico, Australian and Italian researchers, coordinated by Dr. José Antonio Flores Farfán, researcher of the CIESAS’s “Acervo Digital de Lenguas Indígenas” and coordinator of Linguapax Latin America. 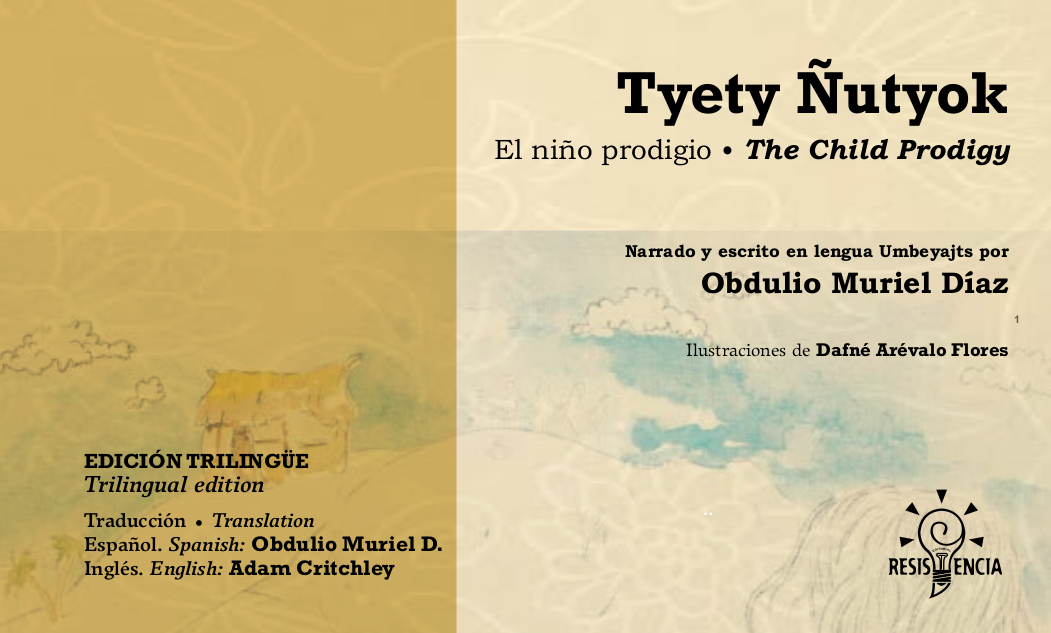 The book Tyety Ñutyok was presented publicly on 25 February, with the gathering of an intercultural community, through digital transmission originating in Mexico, with participants in San Dionisio de la Mar, Oaxaca, Australia and Italy. This intercultural community has worked for several years in the Ikoot, “Huaves” communities of San Dionisio de la Mar and San Mateos de la Mar, where it has been able to collect the cultural and linguistic expressions of the women and men of the sea. Their work combines the knowledge of Ikoot artists devoted to the recovery of their orality with the academic work of applied linguistic revitalization by researchers from Australia, Italy and Mexico.

The presentation began with the words of Itzel Salas, from the Australian Embassy, who expressed the importance of supporting this type of international collaboration in favor of the revitalization of endangered native languages and has ratified the committed support of his government.

Following his intervention, researcher Ghil’ad Zuckerman of the University of Adelaide, Australia, deplored the repression on the grounds of linguistic diversity suffered by peoples of Pakistan and Bangladesh. He also noted his own work on “revivalistics”, a concept created by himself, which consists of a process of reavouring linguistic languages that remain asleep.

Then it was the turn of Francesco Zanotelli, who has studied for many years the myths of the Ikoot communities, such as that of San Dionisio de la Mar. This Italian researcher from the University of Messina has contributed to the recovery of the ancestral knowledge of the Ikoots deposited in their ancestral memory, which he has found linguistically active in their orality, such as the myth of the Tyety Ñutyok, a prodigious child despised by his own community, referring to the syndrome of “no one is prophet in his land” to which Ghil’ad also referred.

The researcher Flavia Cuturi of the University of Naples “L’Orientale” noted that Tyety Ñutyok is a very attractive book, which makes you imagine worlds, especially for those who do not know this place, nor the original language of the Ikoot people.

Chiara Bresciani, an Italian researcher of the James Cook University (Denmark), stressed the importance of preserving native languages that are under threat, because, according to statistical considerations, the loss of indigenous languages is associated with the loss of knowledge related to the coexistence of the communities of the original peoples with their environment. She also emphasized that the relationship between language and culture is much more complex than it appears.

Then the moderator José Antonio Flores Farfán introduced the researcher of the Southern Pacific Regional Unit of the CIESAS and scholarship researcher of the CONACYT, Laura Montesi, who highlighted the work of the author, the Ikoots artist Obdulio Muriel Díaz, for his dedication to the production of this book, his care in all aspects involved in the realization of this work and his artistic virtues, thanks to which the book contains the magic that arises from the mythology of the Ikoots people, and is therefore of great value for the confirmation of the cultural identity of this ancestral people.

When it was his turn, the author Obdulio Muriel Díaz, thanked the Italian and Australian researchers who contributed to the realization of this book of enormous importance to the Ikoots. He explained that the book is especially addressed to the new generations of Ikoots who are abandoning their language and beginning to forget their cultural expressions such as Tyety Ñutyok the prodigious child, which is present in the life of each of the Ikoots in different ways. For example, the author said, in the cave of Cerro Cristo, the rite dedicated to the child prodigy, who loved the people of San Dionisio de la Mar, is alive. He mentioned the demands made to the child prodigy related to good harvests, good fishing, a good climate for work, which confirms the deep symbolic presence of this mythological character in both ritual life and everyday life, in the worldview of an entire original people, such as the Ikoots people.

Another participant was Josefina Larragoiti Oliver, director of Editorial Resistenccia, that produced the book. She spoke of her enriching experience in producing this series of books in original languages, such as Tyety Ñutyok. She hopes to obtain more readers, helpling to strengthen Ikoots’ cultural identity amongst Ikoots children.

The book’s illustrator, Dafne Arévalo Flores, was also present. He recreated the text with images that give life to the mythological character who did prodigious, magic and charming actions, which are reflected with great creativity on the pages of this book. The illustrator’s artistic work goes hand by hand with the philosophical depth contained in this work, which records the beauty of the Ikoot worldview.

From the Editorial Resistencia the designer Víctor Palacios, who applied the technology known as augmented reality, with which the book’s literary and visual oral content acquired great strength, making it more attractive for the public to which it is directed.

Finally, the coordinator of this editorial experience, the researcher José Antonio Flores Farfán, stressed the importance of continuing fostering the exchange of cultural practices that enrich the linguistic revitalization of the original peoples. He also highlighted the virtues of the intercultural community that has made it possible to carry out this book, Tyety Ñutyok, as well as of promoting new experiences that strengthen the linguistic rights of all the original peoples.

The presentation of the book “Tyety Ñutyok” was a high-level intercultural meeting with highly enriching knowledge sharing, which contributes to the activities of linguistic revitalization, in the framework of the upcoming Decade of Indigenous Languages established by the United Nations through UNESCO, which is beginning in 2022.