On 8 September, The production of multimedia material in native languages in Mexico: an example of linguistic revitalisation was held within the framework of the International Literacy Day, through a virtual conversation organised by the Australian Embassy and the Center for Research and Higher Studies in Social Anthropology (CIESAS).

The event featured A du’u ú Chi Jitdö Chintiy Dibaku (Riddles and tongue twisters in Cuicatec language), which in the words of Dr. José Antonio Flores Farfán, is the product of a linguistic tequio (community work). This publication is an editorial experience derived from a work of the Comprehensive Community High School of Santo Reyes Pápalo, a Cuicateca community located in the glens of Oaxaca, oriented to the intercultural education and the linguistic revitalisation of the original languages of Mexico.

The host of the discussion was the Embassy of Australia, headed by its owner, His Excellency Mr. Remo Moretta, who after welcoming the speakers and the virtual audience, emphasized that today 100 of the 250 Australian indigenous languages ​​are spoken. They were spoken before the arrival of the British in 1788. However, many of these languages ​​are at risk of disappearing as generations pass away.

Faced with the danger of its cultural and linguistic extinction, the Australian government has strengthened its state policies that recognise, value and respect its linguistic and cultural diversity based on its native peoples. The Australian Ambassador also highlighted the will of his country’s government to promote cooperation between the two nations, which in fact is expressed in supporting projects applied to the linguistic revitalisation of the original peoples of Mexico with the support of Australia, as is the case with A du’u ú Chi Jitdö Chintiy Dibaku.

A du’u ú Chi Jitdö Chintiy Dibaku, Riddles and tongue twisters in Cuicatec, has trilingual content: in Cuicatec, English and Spanish, in addition to being complemented by an application to view the materials in augmented reality, which constitutes an innovative proposal for linguistic revitalisation.

In his speech, Australian researcher Nicholas Evans, from the Australian National University, highlighted that Australia and Mexico are two similar countries because both are distinguished by their biological and cultural diversity. He said that for both countries their biodiversity represents wealth that constitute sources of life, they represent expressions of cultural diversity as they are inhabited by native peoples, who also protect them and from whom we have much to learn.

At the time, Dr. José Antonio Flores Farfán, coordinator of the project The production of multimedia material in native languages in Mexico: an example of linguistic revitalisation, pointed out that A du’u ú Chi Jitdö Chintiy Dibaku is like a linguistic tequio, a dynamic result of the cooperation of high school students in the community, who contributed the knowledge of their collective memory, their linguistic skills and abilities, their intelligence and tones of their language, as a song for different voices, to which artistic talents and institutions joined and gave life to this book that seeks the revitalisation of Dibaku.

Lucía Lezama, Pablo Cruz and Juan Carlos López, Cuicatec representatives and authors, discussed that these play on words and intelligence tell us about the components of their cultural contexts, their forests, their fruits, their rivers, their animals, so that everything that is named comes from the bowels of its community, everything is part of its own environment.

For her part, Josefina Larragoiti, director of Editorial Resistencia, said that this book is made by the students that represented their community, their clothes and their faces according to how they are and how they decided to represent themselves. The editor highlighted the care they took to achieve trilingual publication, especially so that all three languages appear together on the same page.

Víctor Palacios, illustrator and creator of the application that produces the effect of augmented reality, stressed that he was very careful to recognise the value of the book and then enhance it so that by applying the technology, it would not overshadow it. In this case, the digital application helped, so that the book itself is the one that tells the riddles and tongue twisters orally and with animation.

From the educational point of view, this editorial experience shows the possibility of creating innovative intercultural educational materials that belong culturally to the communities, in addition to having linguistic and cultural relevance and belonging, which facilitates the development of dynamic classes with young people more interested in learning their own language, using their own expressions, such as, riddles and tongue twisters. 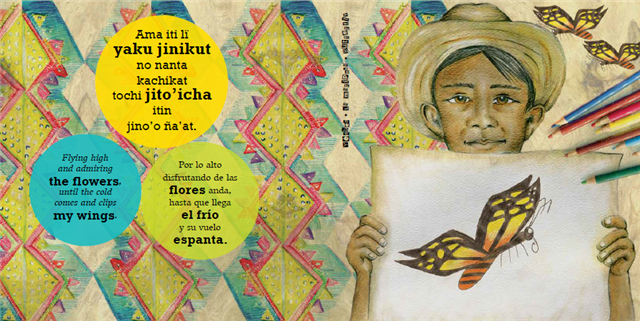 The experience in the Comprehensive Community High School of Santo Reyes Pápalo seeks to strengthen and develop native languages, in this case Dibaku or Cuicatec, to reaffirm cultural and linguistic identity through educational strategies such as linking the indigenous language curriculum with the project of riddles and tongue twisters, which in the linguistic context of the Cuicatecs they are called trabatonos, since their language is tonal; in other words, it is built with different tones that provide different meanings with which they name the world, forming a language that looks like a song, hence the word Cuicateco, which is how the Mexica called it since pre-Hispanic times.