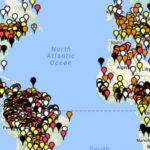 UNESCO is looking for a qualified individual/company delivering a conceptual graphic design proposal for the development of a global online platform entitled “UNESCO World Atlas of Languages (UNESCO WAL)”.

The WAL which will be developed as a new version of the existing UNESCO World Atlas of Languages in Danger aims to contribute to the safeguarding of the world’s diverse linguistic, cultural and documentary heritage, in multiple languages, and reinforce the modalities for implementation of UNESCO’s Recommendation concerning the Promotion of Universal Access and Multilingualism in Cyberspace (2003).

The qualified entity should prepare the proposal in line with UNESCO’s “Roadmap towards UNESCO’s World Atlas of Languages”.

In order to be considered, interested entities should submit the following information:

The Expression of Interest and accompanying documents must be received by UNESCO no later than 2 June 2017, 18.00 p.m. Paris (France) time. Expressions of Interest can be sent by e-mails: i.kasinskaite(at)unesco.org (link sends e-mail)

More information on this call is available here.