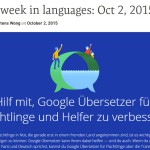 We came across a weekly press review that lists all kinds of international news related to languages (language policy, language and education, minority languages, etc.). “This week in languages” offers a brief account of facts and includes links to online articles in different languages. Its author, Kevin Martens Wong, is a third year linguistics major at the National University of Singapore and the editor-in-chief of Unravel: The Accessible Linguistics Magazine.

Here is an abstract of the latest issue:

Sermons at Al-Masjid An-Nabawi, or the Prophet’s Mosque, will now be translated and broadcast in Chichewa, English, French, Hausa, Turkish, and Urdu on selected radio stations in Medina. Broadcasts will also be made available online. Director of the Prophet’s Mosque translation department Abdullah Al-Hattab said that the new initiative was to “assist and welcome visitors, worshippers and Muslims from all around the world”.

Estonia has launched a new full time Russian language television channel that apparently seeks to act as a counter against Russia’s own efforts to increase its influence through the language, which was highlighted last week.

Europe celebrated the European Day of Languages on Sunday. Observers in Cyprus and the United Kingdom wrote about learning languages as a way of understanding cultural diversity, while students in Austria (German) sang songs in foreign languages outside supermarkets and Utrecht held its annual Drongo Language Festival (Dutch). Not everyone was in a celebratory mood, however; Diego Marani at eunews.it noted the lack of a coordinated strategy in the promotion of Italian (Italian) worldwide, while Sandra Lacic highlighted many Croatians’ impatience (Croatian) with learning a new language.

This week is Tuvalu language week in New Zealand, which also celebrates the traditions and culture of the Tuvalu people. The motto for the week is Tau gana ko tou lloga (Language is your identity), and there are approximately 13,000 Tuvalu speakers worldwide.

And here is the link to this week’s roundup : http://unravellingmag.com/this-week-in-languages-oct-2-2015/

Roundups are posted weekly on: http://unravellingmag.com/dialogue/