2014: Valencian School-Federation for Associations for the Language FEV 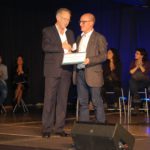 « Escola Valenciana – Federació d’Associacions per la Llengua, is a civic organization formed by 29 local and regional associations in Valencia, Spain. The main objective of the organization is the normalization in all fields of use of the Catalan language (also known regionally as « Valencian »), with special emphasis on the Valencian education system. They started their activity in the field of education between 1984 and 1986, when the first Coordinating bodies were set up. Eventually, they federated in 1990 with the name of Escola Valenciana – Federació d’Associacions per la Llengua, with the aim of encouraging the creation of an educational system with Valencian as the medium of instruction. In this framework the Meetings of Valencian-medium schools started, gatherings to have fun but also to make demands, and they have become the mostly-widely known activity of the organization. These festivals for the language bring together, every year, more than 220,000 people, including parents, students and teachers, in over 20 regional meetings.

In recent years the organization, while keeping up the action at school, has expanded in terms of promoting the use of Catalan in other areas of social use. Education, music, film, literature, popular culture, multiculturalism, volunteer work, sustainability and participatory democracy are the pillars of a new vision of the Valencian School as a holistic body, which has become a constant, constructive lobbyist on Valencia’s social, educational and political scenes.

All these fields of action have led to specific projects and services such as Volunteers for Valencia, The Sunflower Itinerant Music Festival in Valencia, Come to the Territory, Cinema at School, the Office for Linguistic Rights and as well as the Devedeteca (DVD collec tion), the « Album » collection and Popular Culture Workshops. 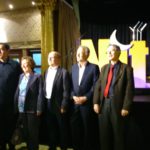 The award ceremony took place in Albal, Valencia on the occasion of the XIIth Nit d’Escola Valenciana, in Albal, the annual ceremony in which the Federation delivers its « Attempting freedom » awards. The event, conducted by presenters of the radio and tv channel Canal Nou (closed down just a year before), was dedicated to improvised singing and featured performances of renowned singers from Valencia, the Balearic Islands, Catalonia and the Basque Country. During the event, the president of Escola Valenciana, Vicent Moreno,  Fernand de Varennes delivered the award to Vicent Moreno, underlining that « today’s ceremony is part of a particular historical context. This context is unique, but also occurs in many places, whenever a government does not respect the wishes of parents who want their children to be educated in their own language, which happens to be the language of the territory.