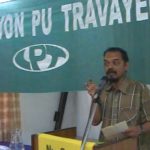 Ledikasyon pu Travayer(Mauritian Kreol for “Workers’ Education”) is an independent association created in 1976 that brings together people to promote the mother tongues, Mauritian Kreol and Bhojpuri, and to promote mother-tongue based multilingual education.

As a French colony and later a British colony, the official language in the Indian Ocean state of Mauritius is English and the language of the elite (sugar plantocracy and urban intellectuals) is French although the last Census (2011) shows that 84% of people speak only Kreol at home, while 5.3% of people speak only Bhojpuri.

For the first 25 years of its existence, LPT concentrated its battle to promote Kreol and get it recognized officially by stressing a number of arguments, including the fact children from poorer families are disadvantaged in school, peoples’ capacity to get good jobs is negatively affected, literacy levels are very low despite free education, democracy is undermined by running the country in two languages that are not mother tongue to 90% of the population.

Then, some 10 years ago, LPT shifted its emphasis towards exposing the harm being done by the State’s language policy to children’s cognitive development. In practice, LPT has run a permanent campaign taking all sorts of forms: petitions to authorities, public exhibitions on the history of the mother tongue/s, forums and debates, public lectures, a colloquium, poster campaigns, courses on how to write the mother tongues properly, leaflet distribution, letters of protest about the suppression of the mother tongues, demonstrations, charters in favour of the mother tongues, and in favour of the right to keep associations’ collective memories in the mother tongues, while also, jointly with Municipalities, and alone, LPT has organized celebrations of World Kreol Language Day (28 October) since 1982, and also celebrated Mother Language Day on 21 February since the year 2000 when it was first celebrated worldwide. LPT was awarded the UNESCO World Literacy Prize in 2004 for its adult literacy programme, which places the emphasis on women, its respect for cultural context and use of mother languages. The organization has also produced, printed and distributed books including the first Mauritian Creole dictionary, as well as other printed materials for literacy in Kreol, or other reading matter in general in the mother tongue/s. In order to encourage literary production, LPT has also organized 5 editions of a literary prize. Although Kreol and Bhojpuri have made a tremendous progress in 2012, when for the first time the State recognized the mother tongues officially, and Kreol, and to a lesser extent Bhojpuri, were introduced into Government Primary Schools there are still threats and major targets like introducing Kreol as medium in schools and as official language of Parliament as well as English. And LPT is probably the only organization that has the historic momentum and punch to do this.