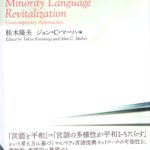 Linguapax Asia publishes a bilingual volume (English/Japanese) entitled Minority Language Revitalization (Contemporary Approaches), gathering the proceedings of its symposium on Endangered Languages Networking: Values and Benefits for the Future (September, 2014). Articles include case studies on glocalisation and revitalisation, higher education and tolerance of diversity, Japanese education policy from the viewpoint of an endangered language in Miyako Island, revitalisation of the Ryukyuan languages, ainu on the net and community learning, identification and practical situation of endangered languages in China, networks of speakers of endangered languages in Thailand.