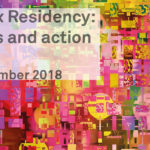 Languages evoke all manner of passion. From the intellectual elation of the linguist who sets out to describe a language whose grammar has not yet been formally ordered. To the visceral creativity of the wordsmith, a living engine of art and emotion. To the tenacious curiosity of so many amateur students of linguistic diversity, one of the richest and most challenging forms of human diversity.

But what does this linguistic diversity, this driver of cultural diversity, really include? It is not merely language as presented in grammars, dictionaries and textbooks for the purpose of “learning a language”. Linguistic diversity also includes the various means by which the cognitive system filters sensory disorder and channels the world that reaches us: The very arrangement of space, time, number – different perspectives of human action, and of the very concept of person. Moreover, it characterises the interrelationship between language, body and mind (spirit) that accords to each culture, the multiple ways of relating language with identity, and also the conception of communication and even conversation. In short, linguistic diversity includes every facet of human imagination and interaction with the planet, that upon which humans live and co-create.

How can all this untapped potential of linguistic diversity for knowledge and creation be put to use? How can it be rendered as a productive source for our collective imagination or for our social and political creativity?

There is a fascination surrounding the worlds that create languages and the languages that create worlds in eye of the beholder. Therein we discover a literal manifestation of the reciprocal construction of worlds and languages, as found in Klingon, Na’vi, Dothraki, and others. The fact that languages create unique worlds should not come as news to the people and organizations around the world who work to preserve and revitalize languages, languages whose ethos is historically rooted in human communities. The reactivation of languages, big or small, is a motor of contemporary culture, not a fragment of some fossilized past. A whole capital of knowledge and wealth of human relationality disappears every time a language dies. Meantime, the planet’s major cities are reanimated as observatories of human communication and language – environments of high linguistic and cultural diversity.

We would like to deal with all these theoretical, critical and creative questions during the course of the residency, “Languages, Worlds and Action”. LINGUAPAX is proud to present this initiative in collaboration with FABER, the Arts, Sciences and Humanities Residency of Catalonia, in Olot, a place for professionals from the Arts, Sciences or Humanities fields (writers, translators, artists of diverse disciplines, scholars and scientists and so on) come to work on their personal projects for a time. The initiative aims to address the scope and the potential of linguistic diversity by bringing together activists in the defence of cultural and linguistic diversity, linguists and anthropologists, theorists and verbal artists.

Participants will share a week at the FABER Residency, during which visitors and observers will attend, and afterwards disseminate their projects via cultural and educational centres within Olot. Participants will then present the contents and projects of the “Languages, Worlds and Action” residency within the framework of the international meeting organised by LINGUAPAX on 20 and 21 November 2018, at the Centre for Contemporary Culture in Barcelona (CCCB).

Videos of the presentation at #Linguapax 18 conference: