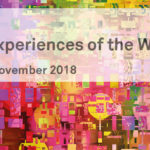 The world is a conversation, not the object of our conversation. Those were Tim Ingold’s words from two years ago during his lecture at the Center of Contemporary Culture of Barcelona, the venue ​​where Linguapax now celebrates its annual international conference. Many consider the inclusion of linguistic diversity to be crucial to animating this world-conversation, with all the weight of the word.

A year on from our last meeting, Linguapax now wants to continue the reflection that commenced in 2017: How can we move on from the traditional debates (globalization versus endangered languages), and from the paradigm involved (a certain conception about what languages ​​are), to the active integration of languages ​​in the imagination and action of the world?

A world-conversation – one latent as a small-scale experiment in our contemporary cities – that we will project across the two days of #Linguapax2018 from three different angles:

Languages ​​and cities: As urbanization becomes a crucial phenomenon of the 21st century, cities are becoming the privileged locus for the observation of changes in communicative culture – and one of their core facets, language. That is why we want to examine cities, from their potential for geopolitical imagination, through their role as critical labs of participation, to pax linguistica.

We are also counting on the participation of international organizations on linguistic diversity, UNESCO and the 2019 International Year of Indigenous Languages.

Languages ​​and the arts: Linguapax have co-organized, with the FABER Residence of Arts, Sciences and Humanities of Olot, the residence “Languages, worlds and action” between the 12th and 19th November. This residence will create a shared space of exchange and collaboration for agents of linguistic revitalization, theorists of language and critical anthropology, and creators who use language as a medium in different ways (such as invented languages ​​that create worlds, multimodal verbal arts, and transcultural theater). The participants of the FABER-Linguapax Residence will present their current projects, as well as plans for future cooperation, at the CCCB within the framework of #Linguapax2018.

Languages ​​and spiritual traditions: As the work of philosopher Raimon Panikkar reminds us, each language is a way of seeing the world, of being in the world, and of world-making: From a qualitative vision of human communication, beyond the word as a dead label, beyond the banal quantification of interlocutors. It is in this spirit, latent since the conception of Linguapax, that the organization joins the celebration of the Year of Panikkar. Linguapax does so in order to explore the relationship between languages ​​and spiritual traditions (a theme initiated by the conference held in 2017) and the sense of dialogue and intercultural silence. Linguapax addresses this theme within the framework of #Linguapax2018 through “The Languages ​​and the Spirit of the Wor(l)d”.

We will close this two-day series of events with a lecture by the Bask writer Bernardo Atxaga, a creator between languages. Linguapax’s two-day conference will explore how linguistic diversity illuminates different avenues of contemporary culture. Not just to celebrate, once again, diversity as an end in itself. But in order to discover the territories of human experience and creative coexistence that fine tune our (geo)political and social imaginations. Territories of an expanded consciousness to which linguistic and communication diversity can grant privileged access.

10:00-10:15     Presentation. Cities, Arts and Experiences of the Word. Alícia Fuentes-Calle, director of Linguapax.

Jordi Pascual, Committee on culture of the United Cities and Local Governments (UCLG).

Year of Panikkar. Languages and the Spirit of the Wor(l)d.

Zen and limits of the word. Raquel Bouso, professor of Philosophy.

09:30-16:00      Languages, worlds and action. Introduction of the Faber-Linguapax Residency that will have taken place on 12-19/11 at the FABER International Residence (Olot).

15:00-16:00      Linguistic revitalisation. Introduced by Miquel Strubell, president of Fundació Congrés de Cultura Catalana and member of the Linguapax International Board.